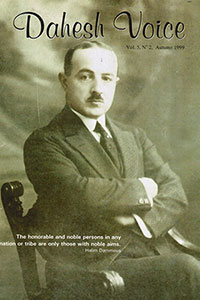 Any Hope for Spiritual Renewal in This World?

The twentieth century has witnessed about a hundred bilateral or multilateral wars, not to mention two World Wars. Yet, despite millions of victims, global devastation, gigantic losses and hideous atrocities perpetrated, the conscience of most people remains unshaken, blind to the spiritual causes of these catastrophies and to the significance of spiritual values-whose decline has released dictatorial arrogance, vicious ambition and power mania.

The liberal sexual movement of the sixties devastated Europe and the United States, then infected the whole world. Aggression and sex mania reigned over the. media; hypocrisy suffused the religious, political and social aspects of life everywhere; family values disappeared; politics blinded the western countries to the moral abyss in which they wandered (See The Way of Spiritual Progress, Arabic Section, p. 5). According to Samuel Huntington, the noted Harvard University political scientist, arrogance has driven U.S. officials to “boast of American power and American virtue”, to “lecture other countries on the universal validity of American principles, practices, and institutions,” then to enforce them throughout the world (Foreign Affairs, March/April. 1999) .

Do these indicators mean that hope in spiritual progress has faded away, especially in the West, bearer of the flame of scientific progress, and that humans have doomed themselves to an ever retrogressing life?

Francis Fukuyama, noted professor of public policy at George .Mason University, accepts that the 1960s marked a moral downturn in the West, as evidenced by many “indicators of social dysfunction, including crime, welfare dependency, divorce, illegitimacy and drug use.” But he argues that [American] society has begun a process of‘remoralizing’ itself and walking back from the cultural abyss it faced ” (Wall Street Journal, Feb. 11, 1999).

However, according to Daheshism, the only way that leads to world peace, sound society and contentment in people is spiritual renewal which is achieved by returning to a truthful and fervent belief in the universal spiritual values, which include justice, freedom, altruism and other virtues— through belief in the unity of religions.

The best proof of this unshaken belief may be drawn from the lives of a few early Daheshists. In previous issues of ^Dahesh QJoiee, we wrote about the two poets Halim Dammous and Mutlaq Abdel- Khaliq and the painter artist and writer Marie Hadad who have shown us that the road to human perfection is difficult but not impossible. In this issue, we write about the virtuous lives of Dr. George Khabsa and George Hadad. Both belonged to the Lebanese elite, the former was a unique dermatologist, the latter a successful businessman and brother-in-law of Bechara-el-Khoury, the ex­president of Lebanon (1943 -1952).

As soon as Khabsa and Hadad met Dr. Dahesh and witnessed some of his miracles, they embraced his message and adopted his beliefs. Attracted by his moral values, they revolted against religious fanaticism, vanity, worldly indulgence and earthly values, confronted the tyrannical assault of political and religious power, and led a life of virtue.

In 1969, the year which is considered by historians as the climax of the liberal sexual movement, they left this world as if they had been strangers in it. Fortunately, man is endowed with will power, which enables him to change if he wants to (See elegies and articles on Khabsa, Arabic Section, pp.60-81). Gandhi, a forerunner, gave palpable evidence of the possibility of spiritual change through self- discipline, and that “there is no limit to our capacities”.*