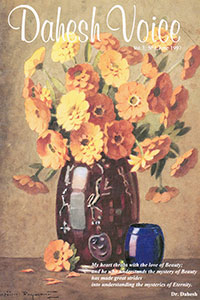 June 1, 1997 marks the eighty-eighth birthday of Dr. Dahesh as well as the second anniversary of Dahesh Voice.

Since it was launched, two years ago, Dahesh Voice

has already attracted thousands of Arabic and English readers through its humanistic and spiritual points of view. Distinguished by the diacritical formatting of its  Arabic text, Dahesh Voice has been viewed as a highly valued linguistic and cultural tool in several Arab- American circles in addition to departments of Middle- Eastern Studies at North American universities. Upon the request of its readers in the United States, Canada,    Europe, and several Arab countries, Dahesh Voice will

be evolving from a quarterly to a monthly magazine. We would like to take this opportunity to thank all our readers for their continuous encouragements that prompted us to achieve that goal.

Art and literature are two of the major interests that occupied Dr. Dahesh during his lifetime. His deep interest in literature and other cultural aspects including art, began at a very tender age. Several years later,      between 1943 and 1952, Dr. Dahesh was subjected to an unlawful and oppressive campaign launched by the then

and his administration. During that period, forced to remain hidden from the public eye, Dr. Dahesh launched      his own campaign for collecting art   through correspondence to different parts of the world, but specially Europe, with living artists or their descendants. Hundreds, yet thousands of letters were exchanged seeking artworks for sale or commissioning specific subjects from Dr. Dahesh’s very own ideas and vivid imagination. Several of these commissioned artworks were used as illustrations for his literary creations.

In the beginning of the summer of 1969, Dr. Dahesh began his more extensive travels around the world which lasted until the summer of 1983. During these travels he established personal contacts with new artists, frequented museums and galleries, purchased many pieces of art, thus adding to his collection. Dr. Dahesh believed that art is one of the basic premises of any advanced civilization as well as a measure of human progress (see “Dr. Dahesh and Art”, by Tony Shasha, Arabic section, p.27 within this same issue). Other articles giving a broader view on art are covered separately by Dr. Sarwat Okasha in his article “Art and Life” (Arabic section, p.5), and by Dr. Ghazi Brax in his review of the book entitled ''The Dawn of Art: Chauvet Cave" (Arabic section, p.75).

Dr. Dahesh, however, is best known for his humanistic views and spiritual guidance that calls for the equality of humankind and the unity religions through the understanding of spiritual laws, Divine justice, reincarnation, just deserts and freedom of choice. Had the Lebanese people heeded his message that explains the purity of religions and how people can be brought together regardless of their differences through restoring faith in the very essence of religion, perhaps the Lebanese civil war and its miseries would have been avoided.

On this second anniversary of Dahesh Voice, we honor Dr. Dahesh and his unique vision embodied in the remarkable heritage he left behind within the worlds of literature and art—a legacy of more than a hundred and fifty literary works, currently being published in several languages; one of the largest private libraries in the Arab world; and a personal art collection of approximately two thousand paintings, hundreds of sculptures and other decorative works of art now belonging to the Dahesh Museum in New York City.

Dahesh Voice through its editorial Board voicing the numerous requests of Dr. Dahesh’s admirers around the world, dedicates this issue to the memory of Dr. Dahesh, in admiration and respect of his person, his achievements and teachings.

Dr. Dahesh, we salute you!