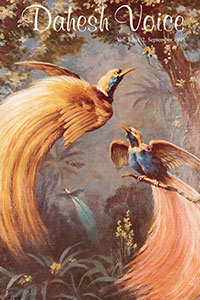 Spiritual Awakening in the Land of Materialism

America, where money and sex are treated as gods, is going through a period of great spiritual awakening. According to many critics, such an awakening has no parallel in recent history. Despite the increasing crime rates in many of the states, the widespread of moral decay in many cities, and the growing greed in commercial and financial institutions, spiritualism is suddenly spreading and taking on different forms.

For several months, books with spiritual content have exceeded 25 percent of all the best-selling titles listed weekly by the New York Times. Such books cover subjects such as spiritual values, virtue, self improvement, the afterlife, the existence of God, immortality, angels etc.... Even some best-selling novels have taken a spiritual direction.

The popularity of spiritual matter is not limited to current books only, but extends to the arts and to the publishing world. Musical recordings with spiritual overtones are selling today in unprecedented numbers - in some cases, almost 3 million records. The general media as well in the past 20 months has been continuously covering such subjects. Some of the highly rated television programs have been allocating a portion of their shows to spiritual issues. Even on-line computer services include regular forums on religion and spiritualism.

According to recent statistics, the number of people who believe in reincarnation as an explanation for life's happenings, or who resort to nature for meditation has increased to more than 1/3 of the American population.

Through their reseach, scientists in many fields are now trying to prove the existence of the Great Spiritual Power in the universe, after they have come to the

realization that human beings are a complex sum of energies that are intertwined with all other enegies in existence, whether animal, plant, or inanimate objects. It has reached the point that Frank Tipler, a physicist and former atheist, has published a book titled The Physics of Immortality in which he attempts to use science to prove the existence of God.

The American constitution established the separation of church and state, however, an increasing number of people are requesting that prayers be permitted in public schools, or if that is not possible, at least that students be allowed a moment of silence, so that each student can worship as he or she pleases. There has also been a change in the way history is taught in schools. Today, students are introduced to the study of Islam, Buddhism, Hinduism, as well as to the mythologies of creation respective to different cultures.

What is the reason for this wave of spiritualism that keeps growing and expanding day after day?

Comparing the views of various researchers into this phenomenon, it seems that many who followed the paths to spiritualism had not been happy with their way of life and felt disturbed and confused. They were looking for a purpose in life, as well as for that inner peace that they could not find within the domain of traditional beliefs. In a survey conducted in the fall of 1994 by Newsweek magazine, 58 percent of the respondents in America indicated that they need more spiritual experiences and growth.

Humans have the urge to believe in a great spiritual power that makes life meaningful. This force becomes a source of consolation and hope at times of need. If the universe does not have a just God, and if the soul is mortal, then the struggle for the dominance of humane values has gone to waste-sacrifices would become meaningless, good and evil become one and the same, and everything that humans have sought or continue to seek becomes vain.

Daheshists believe that there is a strict spiritual order to the universe, and that a spiritual force is capable of preparing things for the great advent--the declaration of the second coming of Christ which will mark the end of an era and the beginning of another. Did not all religions prophesy the coming of a savior? Could it be that the "Voice" of Christ himself is stirring such spiritual awakening?