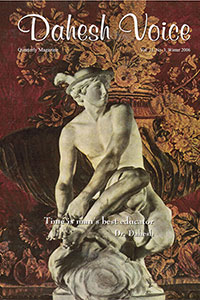 Every Nation Today Is the Outcome of its Past

The essence of any religion, according to Daheshist teachings, lies in its humane and spiritual values, such as love, compassion, tolerance, virtue, as well as defending human dignity and rights, particularly the freedom of faith and speech. At its core is also the incitement of believers to pursue higher spiritual and physical knowledge, because the Almighty is the Absolute Mind, Ultimate Goodness, Truth, and Beauty. Thus, by limiting their faith to rites and traditions, believers are driven to ignorance, blind fanaticism, and internecine conflicts, with consequent weakness and decadence. Moreover, every nation’s past remains active in its present. People’s lives are similar to a river of “Fluids” that flow from the Beginning to Eternity. Any person, regardless how knowledgeable he or she may be, can only see what is revealed to him/her at the present moment. This reality is clarified in the current issue and applied to people in the Far East after the advent of their spiritual Guides (Ar. Sec. p. 6).

In an attempt to promote Arab progress, several authors have identified the underlying causes of Arab underdevelopment and highlighted the views and efforts of social reformers. Mr. Ala Al-Araji notes that building developed countries starts with edifying their citizens and making them the supreme goal of development. This is realized by offering good education to individuals: but it has not happened in the Arab countries, which are rich in natural resources, yet short of benefiting from their creative human potential (Ar. Sec., p. 17).

Dr. Taysir Nashif writes about how the lack of dialogue, respect for the opinions of others, and objectivity have impeded the progress of Arab countries. Individuals and groups make mistakes, and objective criticism should be respected. Furthermore, dialogue should be based on clear intellectual principles and premises, otherwise it would not generate valid results; rather, it would increase the complexity of the intellectual crisis (p. 19).

Dr. Samira Madi continues the study of Sheik Khalid’s reformative views about the Arab, and particularly the Egyptian, regime. She illustrates the causes of social underdevelopment, which Khalid highlights the feudal exploitation of peasants, employees, and civil servants, corrupt governments based on favoritism and bribery, high unemployment rates and social separation between the sexes, which originates from erroneous judgments and maladroit psyches (Ar. Sec., p. 28).

Dr. Victor Kik deals with some facts and expectations in Arab-American inter-relations represented in the efforts of the Lebanese writer Ameen Rihani. He shows how Rihani devoted his writings and intellectual struggle to promote the unity of religions, unity of the Arab World, and unity of humankind. He demonstrates that some of Rihani’s writings tried to reconcile the East and West, faith and reason, spirit and matter (Ar. Sec., p. 36).

The Arabic Section also includes a curious article by Paul Khayat on using Arabic poetry to date important events (p. 53); an article on care for the elderly in advanced societies by Dr. A. Haouili (p. 62); Part 2 of “Prose, the Language of Civilization”, by Dr. Maha Attar (p. 67); the competition between novels and movies, by Dr. Fawzi Zamarli (p. 76); and an inspiring spiritual poem by Youssef Abdel-Samad (p. 50).

The English Section includes the conclusion of articles on Naguib Mahfouz, by Dr. Akef Abadir (p. 4), a psycho-literary study on Ernest Hemingway, by Hind Amel Mostari (p. 12) and an essay on the nature of perception by William Hanna (p. 25).

As usual, this issue contains a short story by Dr. Dahesh, in which Daheshist beliefs are best reflected in a simple and clear manner. The selected short story focuses on the influence of live conscience on the strength of faith and the impact of faith on man’s behavior (p. 31), ★