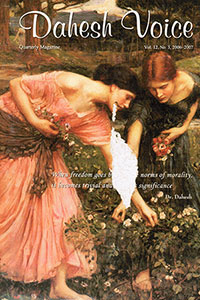 As soon as the Roman Catholic Church achieved full authority, in the fourth century, it transformed into an authoritarian state that deviated from the spiritual values of Jesus Christ who attested that his kingdom is not from this world. Aiming for supreme power drove the popes to using devilish means. They imposed blind obedience on their subjects, and installed horrible “Inquisition Tribunals” to which they subjected their foes along with those who disagreed with their opinions, even in the scientific domain, and thus they exterminated hundreds of thousands of men and women. This tyrannical and deviated behavior crippled Christian civilization and paralyzed its intellect for 12 centuries. During these years, Divine Justice punished the Roman Catholic Church and its followers with seven successive tribulations: the invasion of Rome by the Visigoths, the conquest by Attila, the invasion of vast regions of Byzantium by the Moslem Arabs, foe humiliating failure of the Crusades, the Great Schism between the Eastern and Western Churches, the epidemic of the Black Death, which exterminated one-third of Europe’s inhabitants, and the rise of Protestantism ( Ar. Sec., p. 6).

Dr. Suheil Bushrui points out that man’s freedom and dignity are among his fundamental rights which were codified as spiritual laws in all Scriptures, and that these rights did not originate from modem secular regimes. All prophets and spiritual guides advocated justice, peace, and fraternity among peoples and nations, as well as tolerance and compassion (Ar. Sec., p. 18).

Dr. Samira Madi reveals some aspects of Sheikh Khalid’s philosophy on the interaction between the individual and society. She writes that there is no real existence of the individual outside a society, neither is there existence of a society except by interaction of its individuals, through dialogues and discussions, which revoke despotism. She also explains Khalid’s views that orienting culture and controlling it by prevalent customs and values damages progress and freedom (Ar. Sec., p. 31).

Mr. Ala al-Araji reviews important schools of pedagogy, such as the social structure of domination, acculturation, etc., then he focuses on Bertrand Russell’s theory which claims that all applied pedagogic methods are but a big conspiracy against the individual’s freedom, particularly that of the child, for education is provided in the interest of the state or religious institutions. Finally, he explains his theory' about the “societal mind”, the “active mind”, and the “passive mind” (Ar. Sec., p. 41).

In the English Section, Dr. George el-Hage compares and contrasts Gibran and Blake’s literature. He reveals that they were both inspired by the Scriptures and at the same time, they rebelled against the corruption of the church. He also shows their common sociopolitical vision and message of peace, love, and friendship; however, Blake did not share Gibran’s belief in reincarnation (p. 4).

Dr. Sound AJi expounds on the contribution made by the Western scholars Goldziher, Schacht, and Juynball in studying Hadith Transmission, Hadith being the second primary source of Islamic law (p. 13).

This issue also includes a short story by Dr. Dahesh, which highlights the vanity of man’s hope with unexpected tragedies befalling him (p. 28), in addition to interesting essays by Marie Allush, Sayed Najm, Hilmi Salem and Fatima Juhlat, along with two inspirational and philosophical essays, one by Mr. Mohammad Haraka, Ambassador of Lebanon to Japan (Ar. Sec., p. 57), and the other by Mr. Samir Sumaida’ie, Ambassador of Iraq to the United States of America (p. 27), and a poem by Ghalia Khoja (Ar. Sec., p. 64). In the medical field, Dr. Ghadirian presents the epidemiology of all cancers, including statistics on incidence and mortality, risk, and means of protection (p. 20). ★