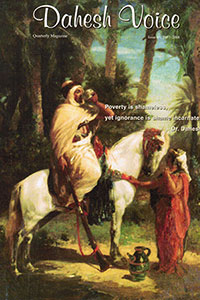 When Will Religious and Human Brotherhood Prevail in the World?

According to Daheshism, world events and all that befalls people are driven by spiritual causality, based on divine justice and universal order, in which lifecycles extend from eternity to eternity, and the consequences of deeds are linked to their causes, no matter how distant they may appear. In this view, spiritual missions have a strong and long impact on subsequent events. This is what happened after the advent of Islam and the succession of the Rightly Guided Caliphs along with Omar bin Abdel-Aziz, although the rule of 'Uthman and that of ‘Ali were somehow weak and had problems that later led to grave consequences. Among the spiritually-prearranged designs for Islam were vast conquests which led to the punishment of those who strayed away from the spirit of the original scriptures (p. 6).

The concept of the unity of religions, which is fundamental in Daheshism, is primordial in Khalid M. Khalid's thought as well, according to Dr. Samira Madi. The same applies to his views on the humane spirit which is the essence of all heavenly religions. As for the divine purpose of Islamic Revelation, it was to "lead men out of the darkness and into the light." Thus, Khaled proposes fighting superstitions and proclaiming the sovereignty of reason and spiritual values, as well as calling for human brotherhood and for "no compulsion in religion" (p. 19).

Hilmi Salem writes about Dr. Abdel-Rahman Badawi, an outstanding Egyptian thinker. He points out that several factors enhanced Badawi's comprehensive culture and prolific writing in multiple fields. Among them was the fact that he belonged to a generation of founders and was an academician, teaching multiple aspects of philosophy. Salem also presents some of Badawi's philosophical and literary works (p. 30).

M. Shu'ayr writes about another outstanding thinker, Dr. Edward Sa'id, author of the well-known book Orientalism, in which he disclosed the contradictions of orientalists. Sa'id chose to follow the difficult path, to criticize, defy, and revolt against the Western misconception of the East, regardless of the pain or life-threatening danger he encountered, for he believed that the "educated" have an intellectual mission and should have a stance toward traditional beliefs. Shu'ayr points out some stages of Sa'id's life in which he stirred up tempests in the face of well-known orientalists (p. 39).

In the sociological field, May Alloush discusses the role of women in ancient and middle eras. Women were likely pioneers in agriculture and home-building, rivaling men in commerce, spinning, loading boats, turning mills, and others. The writer points to prominent female poets, teachers, and thinkers, in Greece and the Roman Empire, as well as to a few rab poetesses (p. 55)

Dr. Ali Haouili presents some features of the awakening of contemporary Arab women. After longtime home confinement and restriction to home activities, Arab women have started to form women's movements, participate in international conventions, advance into culture and world media, as well as in various economic, social, educational, and political fields (p. 62).

In the English Section, Hind Mostari continues her study of Hemingway's novels, focusing on A Farewell to Arms. She presents a summary of the plot, analyzes the characters and compares them to Hemingway's life and psychological traits (p. 4).

Dr. I. Vaid presents basic information necessary for students seeking higher education to know before opting for a specific institute and beginning their courses (p. 14).

As usual, this issue includes selections from Dr. Dahesh as well as a fascinating short story in which Dr. Dahesh reveals the existence of wondrous creatures man is not allowed to know (p. 26) along with a poem by Yasser Badreddine, dedicated to Dr. Dahesh on his Birthday (Ar. Sec. p. 51) On this occasion, we pass good wishes to all those who follow the Daheshist belief in the unity o religions, unity of the human family, justice, and the protection of human rights. ★