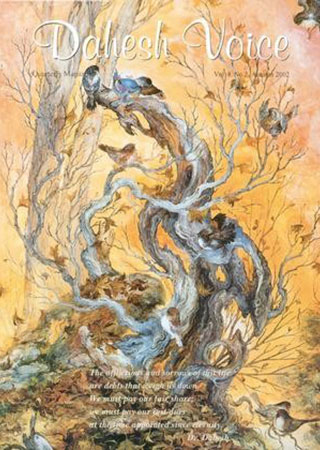 When Will Justice, Liberty, and Human Rights Prevail?

This issue of Dahesh Voice   coincides with the 95th’ anniversary of Dr. Dahesh’s birthday. The birthday of a wonderful star enlightened a great number of people blinded by materialism, and strengthened their faith in immortality of the Spirit and retribution, in a time where faith has become empty words or a means for doing business. Like all spiritual guides and reformers, Dr. Dahesh suffered torture and persecution for his teachings which call for the return to the quintessence of religions, by holding onto love, mercy, and other virtues, and by believing in the essential unity of religions in a world diminished by corruption and injustice, and torn by blind religious fanaticism. Dr. Dahesh also called for justice, freedom, and human rights to prevail in the world, where many countries still succumb under the yoke of subjugation and tyranny.

With this issue, ‘Dahesh Voice   enters its tenth year. Its circle of readers and pool of contributors—of university' professors, writers, and thinkers-   have increased, reflecting great interest in the message it carries: promotion of deep knowledge and virtuous actions, perfection of soul, ultimately leading to spiritual progress and salvation.

From the inspired writings of Dr. Dahesh, this issue includes two meditative pieces comparing the sad reality of Earth relative to the Worlds of Happiness, and on mankind straying away from the Truth (Ar. Sec., p. 5), along with a short story which unveils spiritual causality and the fulfillment of divine justice, through the understanding of reincarnation and the concept of Sayyafs (p. 27).

The Sayyals (spiritual fluids), their kinds and interaction, underlying the causes of diversity in people’s intellectual capacities, tendencies and predispositions are presented, explained, and corroborated by modern science. Also, the attracting or repelling interaction between man and his environment is discussed (Ar. Sec., p. 6).

Several specialists examine various aspects of civilization, from the time of the Greeks to the present. Dr. Majid Fakhry expounds on relations between Christianity and Islam since its advent, and on the theological dialogue between the two religions. He also describes the plurality of religious­-political conceptions, in particular those which are relevant to state secularization, putting forward that the cause of religious disagreement arises from misinterpretation, held onto by fanatics on both sides (p. 4).

Ala Al-Araji follows up on the crisis of civilization in the Arab world. He focuses on the impact exerted on the Arab “societal mind” by skipping the transitional agricultural phase necessary to overcome the bedouin mind and tribal values that prevailed before the advent of Islam; not to mention the impact of long periods of decadence (Ar. Sec., p. 19).

Dr. Samira Madi reviews the revolutionary' period which Sheikh Khalid M. Khalid passed through, starting with his book Hence We Begin, in which he supported state secularization, and Citizens and not Subjects, which contributed with other contemporary writings to overthrow the monarchy in Egypt, then ending with a series of books on democracy and human values—all that made him a representative of the modern liberal trend. Dr. Madi then points out to Khaled’s later pullback and reversal (Ar. Sec., p. 28). ‘

Fatima Na’oot writes about A verroes in the West, his youth, education, philosophical work and the caliphate’s favor to him and his ordeal. Then, the writer presents A verroes’ rational method, his attempt to reconcile religion with philosophy, and the impact of his thought and method on Christian theology during the Middle Ages (Ar. Sec., p. 38).

Dr. A. Etman discusses the impact of the legend of Isis on the Greco-Roman world, identifying her traits through the writings of Plutarch (p. 19). Dr. Richard Popp demonstrates that “al-Rabitah al- Qalamiyah was first formed in 1916, rather than 1920, and that the main motivators for a society of writers were Nasib Aridah and Abd al-Masih Haddad, rather than as is commonly maintained, M. Naimy or K. Gibran” (Ar. Sec., p. 58).

This issue also includes an article by Dr. Sema’an Salem and Liu-Helmersson on environmental pollution by microwaves (p. 12); in addition to three articles by Dr. Ali Haouili, Samir Chikhani and Afaf Abdel-Mu’ti Ahmed, along with a beautiful poem by Yasser Badreddine dedicated to Dr. Dahesh on his Birthday (Ar. Sec,).