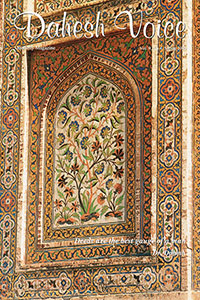 Ingenuity is not Generally Subject to Hereditary and Cultural Effects

A group of psychologists shares with Daheshists the belief in a pre-existing “psychological” force that gives life and grants the individual his/her distinguishing features. That dynamic force—to which Plato alluded mythologically—is not necessarily related to the individual’s genes or to different cultural influences to which

he/'she may be exposed later in life. That independent force is the main spiritual fluid (Sayyaf) which ignites life. While it is difficult to detect its existence in ordinary subjects, it is clearly manifested in superior beings, whose intellectual abilities could not be genetically explained, having ordinary parents or close relatives, or by societal conditions and values, against which they often revolt. Among these superior beings are prophets, spiritual guides, and social reformers, as well as creative artists, writers and scientists in all fields, whose influence leaves an everlasting imprint upon the course of history' (See Brax, p. 5 and Massoud, p. 68).

In addition, ingenuity may be to some extent, influenced by hereditary and environmental factors. Dr. Sema’an Salem presents a family of famous physicians, the Zuhr, who lived in Andalusia in the 10* century A.D. Zuhr excellence in medicine was transmitted from father to son over 7 generations. Their contribution helped in the renaissance of medicine in Europe, which was then engulfed in the Dark Ages (See English Section, p. 4). Dr. Mursi Saad El-Din presents as well a glorious facet of Muslim Art in India, focusing on the contribution of two great rnughal emperors, Akbar and his grandson, Shah Jihan, who built the Taj Mahal Ar. Sec., p. 56).

As an introduction to an academic study on the thoughts of Sheikh Khaled Mohammad Khaled, Dr. Samira Mady

reviews some prominent figures in the religious reform and modernization of Islam movement in the 20th century, notably Jamal Eddine AI-Afghani, Sheikh Mohammad Abdu and Sheikh Mohammad Rasheed Rida. Influenced by an environment deep-rooted in the fundamentalist traditions, these reformers insisted on linking politics with religion, but allowing some minor changes. Dr. Madi further presents some distinguished figures, such as Ali Abd Arrazzak and Abdallah al-Kasymy, who belonged to the intellectual and liberal movement which criticized the Caliphate concept and called for separation of religion and state, a principle which originated in the liberal West (p. 19).

On the other hand, Mr. Ala Araji dwells on the crisis of civilization in the Arab World. He emphasizes that some nomad, pre-Islamic values still dominate Arabs, freezing their “societal mind” and delaying its development. This drives democracy away, diminishes respect for human rights among them, and divides their nation into two groups, one that turns to distant past traditions without fathoming its identity; the other throwing itself in the arms of “the Other” (p. 33). Dr. Ali Haouili adds in his article, “Arabic Cultural Security,” that the Arab renaissance has not progressed. Arabs still face foreign challenges, including dominance by francophone and Anglo-Saxon cultures over them, and even over their language. In addition, Arabs are faced by internal challenges either from totalitarian authorities or from extremist and fundamentalist movements. The writer concludes that the main reason for this decadence lies in forsaking democracy (Ar. Sec., p. 50).

Dr. Abdallah Assi reviews the cultural and educational situation of the Arab communities in Quebec, Canada. He sheds light on the Christian schools, then focuses on Islamic discourse and schools, highlighting religious customs and traditions in both of them Ar. Sec,, p. 43).

Dr. George El-Hage delves into the personality of the writer Ghada al-Samman and highlights some stages of her life, in an attempt to interpret the events of her novel titled “Beirut, ‘75” (p. 10). Hassan An-Nassar delivers his review of the story titled “Sufi Music,” written by Lutfya Al-Dylamy (Ar. Sec., p. 74).

Finally, this issue also includes, as usual, a fascinating short story' by Dr. Dahesh. It reveals the fidelity of dogs and unveils their morals which are sometimes preferred to those of humans. Not to mention an interesting and impressive essay about man’s best friend and his sensitivities, written by the brilliant writer Douglas Johnson (p. 21). ★