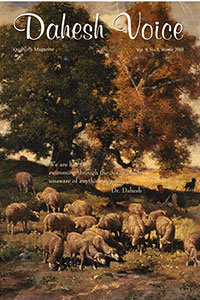 Accord or Discord Depends on People’s Spiritual Fluids

Daheshism is characterized by the new concept of sayyals (spiritual fluids), through which the causes of each event, or condition are explained. Sayyals unite all creatures, without exception, with their spiritual quintessence, which is constituted of intellect, tendencies,

and will, whose levels differ from kind to kind and from being

to being. The personality of every individual is distinguished by a main sayyal that grants him life, and determines his sensory-’, intellectual predispositions, and innate tendencies, each with its proper level. This main sayyal shapes one’s characteristics according to the mental and affective powers it was provided with, before it merged with the fetus (Dr. Brax, Ar. Sec., p, 6). Furthermore, the main fluid carries one’s religion, even if the person converts to- it later in life. As God has granted humans free will, and based on it, they are retributed, forcing people to convert to a specific religion stands against God’s will Further, the pretension that any one religion has the absolute spiritual truth is false, for by discrediting others, religion loses its very essence. In his article “Dialogue among religions and reconciliation with society”, Omar Kush emphasizes the role of religion in people’s cultural, social, economic and political life, and in what reunites, helps and teaches them how to share a peaceful coexistence; he also stresses the role of religion in safeguarding human rights as well as family values and justice (Ar. Sec., p. 20).

Likewise, Ala Al-Araji reveals that reading the religious heritage under the influence of the “societal mind” leads each group to record their impressions about a specific heritage instead of recording authentic facts, and consequently drives them all to fight each other. This internal struggle occurs in all religions, including Islam, where each of the diverse sects considers its concept as the absolute one, and aspires to impose it on others. That attitude springs from clinging to certain constants of religious (or secular) concepts, and is strengthened by totalitarianism and rejection of others’ opinions (See Ar. Sec., p. 26).

In their philosophical or scientific attempts to find a reasonable base to fathom and understand the unity of the universe and its unified laws, and to remove the dichotomy of matter and spirit, modern scientists began to draw closer to the Daheshist concepts. They reached the conclusion that the essence of the universe must be of “mind tissue”. The well-known scientist Cleve Backster has spent many years demonstrating that primary consciousness occurs in the plant world. He presents evidence that plants have intelligence and emotions, not to mention their ability to read people’s thoughts. In the 1970’s, Backster’s discovery caused an uproar in the media. Dahesh Voice welcomes his scientific article on that significant topic, drawing the reader’s attention to his forthcoming book about this matter in the Fall of 2003 (See p. 23). Thirty years prior to that discovery, Dr. Dahesh realized its truthfulness by divine inspiration, proclaimed it and wrote about it (See p. 26).

In another field, Dr. Haouili presents a factual example of the voluntary emigration of Arabs to the U.S.A, and Canada. In his article, he unfolds the immigration stages and legislation in the two countries, and the hardships the immigrants endured, particularly in their first waves of arrival. He stresses, however, that later on, immigrants enjoyed human rights, social guarantees and facility of living—rights they missed in their native countries (See Ar. Sec., p. 73). On the other hand, emigration has a dark side—the feeling of exile. The factors of immigration and exile are diversified and intertwined. New immigrants suffer psychological alienation; many women are in exile even in the midst of their own societies; and some innovators self-exile in search of a land that welcomes their creative works (See Dr. Nashif, p. 4). On the other hand, some creative writers may feel that their spiritual or moral values are different from those of others, even if they shared interests with them. Among these is the poet Mutlaq Abdel-Khaleq whose name rose in the 1940s. Mutlaq, a pioneer of Daheshist poetry, rendered Dr. Dahesh’s book, The Repose of Death, into poetry (See Ar. Sec., May Alloush, p. 43).

In addition, this issue includes an article on the play Antigone on which Dr. Ahmed Etman sheds new light through the historian Thucidydes’ conception of its events (See p. 8); an article on Greek mythology by Najwa Salam Brax (Ar. Sec., p. 62); and an article on tobacco, from its discovery' to pretended benefits and real harms by Dr. Suhayla Mukaddam (See p. 14).

This issue also includes the first part of a review of Mystical Music by Hassan El-Nassar (Ar. Sec., p. 83), along with three poems which have diverse artistry. ★