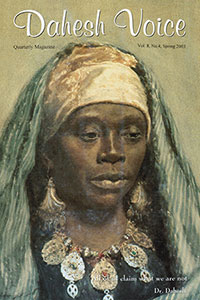 From Globalization to “One World”

After rectifying and infusing its course with humanitarian and spiritual values, globalization will certainly lead to “One World’’, a concept which Dr. Dahesh advocated fifty-seven years ago. A world united by a cultural heritage created by great minds and following an integrated development of its intellectual capacities and lofty tendencies. A world which believes in the essential unity of religions by removing false barriers imposed by fanatics and by adopting an open dialogue based on mutual understanding and respect among different cultures, deeming that cultural diversity enriches global civilization.

A new world founded on justice, freedom, equality, as well as love, compassion, and brotherhood (see Selections by Dr. Dahesh. p. 28 and ah article by the Editor, Ar. Sec., p. 5).

No doubt, globalization governed by wisdom and justice could offer beneficial remedies to many problems that lace the world. I However, by shedding light on its phases and recent concepts, Dr. Sami Aoun appears skeptical about the methods being used to realize it and to distribute its benefits to the whole world, especially if freedom of choice and respect of others are not taken into consideration (Ar. Sec., p. 16). In emphasizing the importance of a civilization based on renovation, creativity, and rationality, Mr. Ala Al-Araji holds the view that many Arab communities still cling to their ancestry (salafiya) and its glorification, making their heritage “more present than presence itself" and. thus, they have isolated themselves from the course of global civilization and remain lagging behind (Ar. Sec., p. 43).

Digging into history to uncover some roots of world civilization. Dr. Issa Khalil unveils a few aspects of the Apostle Paul who relinquished bloody violence against dissenters and turned into “the Apostle of the Gentiles”, striving to spread a new religion founded on love, compassion and tolerance among members of one human family (Ar. Sec., p. 21).

Tapping into the sources of Zoroastrianism, Dr. Victor Kik introduces that belief, uncovers its universal goals, and expounds on its spiritual and human dimensions, which are pivoted on seeking truth, helping humanity, and adhering to righteousness in thought, speech and deeds (Ar. Sec., p. 31).

Other scholars also highlight aspects of old civilizations that had a universal influence. Dr. Sema’an Salem reveals the interest of older day Mesopotamians in mathematics, their role in inventing the “zero”, and its effect on Indian and Greek cultures, and consequently on global culture (see p. 14). Dr. Ahmed Etman writes about ancient Greek authors who dealt with issues that concerned all persons, at all times, and therefore provided Greek literature with universality and everlasting interests (p. 4).

Dr. Sameh Arab discloses the history of the old Library of Alexandria, which, for seven hundred years, remained as the store of all cultural treasures, and the destination of scientists and philosophers, as well as the symbol of cultural globalization. Its legacy ended in 415 AD with the murder of Hypatia, the library principal, and the first philosopher and woman scientist in history (p. 7).

In addition, this issue includes Part II of Dr. George El-Hage’s article on teaching the Arabic language in academia, in which he explains the importance of the five skills: listening, speaking, reading, writing, and culture. The author also emphasizes that acquiring a foreign language is a critical step in narrowing the gap between various peoples and cultures and paving the way for establishing a unified world (p. 20 ). Sayed Najm also discusses the creativity and critical thinking of the child of the Twenty First century (Ar. Sec., p. 76 ).

This issue also includes an essay on Arab art exhibitions in Canada by Yasser Badreddine, a poet and calligrapher (Ar. Sec., p. 69), in addition to an article by May Alloush on transportation in Beirut from the beginning of the twentieth century until the start of the Lebanese civil war (Ar. Sec., p. 64 ), a review by Issam Tarshahani (Ar. Sec., p. 83), and several distinguished poems by Dr. Joseph Sayegh, Dr. Saadoun Suaih, Ghalia Khoja, and M. Atwi (Ar. Sec., pp. 52-56). ★