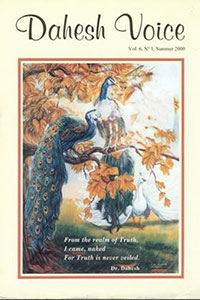 Scientific and technological achievements in the twentieth century have exceeded what humankind had accomplished in the previous six millennia.

While on the verge of the twenty-first century, American scientists have been awaiting the political decision to rush towards Mars to establish a hospitable base on its surface.

is enlarging. Carl Sagan estimated that one million civili­zations exist in our galaxy alone—one of about 100 billion galaxies in the cosmos. NASA is continuing the search for extraterrestrial life, even on the microbial level.

Mapping of the human genome has been completed ; cloning is advancing; Internet traffic is doubling every 100 days; telephone lines are being gradually replaced by strands of fiber, each having the capacity to cany.'two trillion bits of information per second, transmitting audio, video, and other data anywhere in the world..

These are only a few examples of what the scientific and technological revolution has started to yield.

Surpassing in importance is the spiritual progress of the human being himself. Great progress in science and technology       an intellectual product—cannot, by itself, bring inward and outward peace as well as happiness to humankind unless people believe in, and practice, humanist and spiritual values, such as justice, freedom, tolerance of creed, love, compassion and other virtues, which have been praised by spiritual guides, great writers and thinkers worldwide.

Several exceptional intellectuals worldwide defied the political and social darkness over the centuries, trying to raise the human being to lofty levels. Among them Dr. Dahesh stands as a giant on the verge of the third millennium. His insistence on the necessity of liberating the rnind in order to liberate the soul is a key issue in his spiritual mission. Nothing except will power can be tantamount in importance to reason according to his teachings (see Arabic section, p.7). Through actions based on the belief in eternity of the soul, reincarnation and just deserts, one can improve himself to progress spiritually and attain everlasting happiness.

Finally, on the First of June, with great pleasure, we celebrate the 91st birthday of Dr. Dahesh, which coincides with the 6lh birthday of Dahesh Voice. We salute Dr. Dahesh and glorify his spiritual message and his great achievements in literature and art, without which this magazine would not have seen the daylight, and would not have been able to tap into the fountains of lofty thoughts, noble sentiments, and uplifting beauty. On this occasion, we present to him a bouquet of his writings teachings (see, pp. 4, 24), along with articles written about his person, message, and achievements (see p. 22 , and Arabic section, pp.33, 43). We also thank our readers for their support. It is through their encouragement that Dahesh Voice is able to overcome the many hardships that it faces. ★