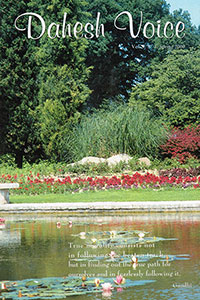 In October 1999, the world’s population reached 6 billions. Noteworthy that.98% of global population growth is in the poorest countries, where depletion of food, water and energy resources is already a serious problem. As the world’s population increases, so will the gap between the rich and the poor. “The wealthiest one- fifth of humanity... consumes 86 % of the world’s resources,” according to The World Press Review.

On July 29, 1999, the World Future Society General Assembly attracted about 1,200 participants from around the world to Washington, D.C. “The first priority”, warned Jerome Binde, Director of UNESCO’s Analysis and Forecasting Office, “is to build a sharing society through the eradication of poverty and the reduction of scandalous disparities which lead to despair and exclusion.” Those disparities were illustrated by Forbes Magazine. “The U.S.A.,” it said, “has more than 200 billionaires and 11 million millionaires, with this last group increasing at: the rate of 300 new millionaires per month.” In contrast, “about 1.3 billion people live on just one dollar per day,” according to the World Bank.

Christian de Duve, a Nobel Prize Winner in Medicine, declared at the Futurist Convention, “I think the greatest threat to humanity is the excessively rapid growth of knowledge.” In fact, the cascade of knowledge we receive every day is like an avalanche whose might overcomes our wisdom and blurs our vision. We create and use new technologies before we understand w'hat their bad impacts will be. Did we learn, for example, from the bad effects of the ozone-depleting CFCs, the nuclear power plants, asbestos, DDT, etc.7 The advent of the Internet with the 20th century. However , How can our children distinguish between facts and fallacies, right and wrong,good and bad, on the internet? Knowledge is not enough ; humanity also needs wisdom to attain its long-term ends.

Linda Groff, Professor of political science and future studies at California State University, put it in other words: “Since more-material cultures usually conquer less-material but often more-spiritual cultures, it is these very spiritual values that the dominant culture needs to re-balance itself, especially when its technology becomes so advanced and potentially destructive to all life, including its own.”

In May 1999, about 10,000 activists from more than 100 countries gathered in the capital of the Netherlands for the largest international peace convention ever held. Among them were many scientists and scholars including 5 Nobel Peace Prize winners. There was global condemnation of aggression committed by one country against another, or even by any country against its citizens. There also emerged an appeal to destroy nuclear arms and gradually decrease military budgets.

The world concludes today what Dr. Dahesh lias called for more than fifty years ago. Dr. Dahesh affirms that only through love, sharing, and justice that peace will prevail and societies prosper. He writes in Memoirs of A Dinar.

... I shall never carry a gun against my so-called enemy, who is, after all, a fellow human being. This earth that God created and filed up with riches, is sufficient to make all people live in peace and prosperity. That is only if men were pure at heart, had good intentions, and cast out the demons of greed that nest within like vipers that dwell in cracks and crevices.

"World peace is the dream I long for....

The day when the angel of peace shall spread his wings over the vast world,

The day when gust ice shall prevail in this world drowned in utter misery;

The day when the politicians of the. world arid countries of different desires will

The day they vow to contentment, without which there can be no peace;

The day when that dream, that dwells upon me even in my dying hour, comes true...

Then will my soul rejoice. ...I

Then will I be certain that humanity found its dream, long lost in the maze of greed;

So my spirit will enliven and my heart will glow with happiness. "

Do we dare dream of peace on earth in this new centuty?