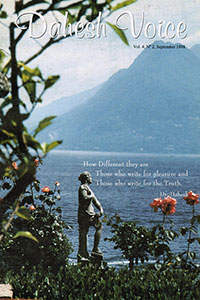 Where are we from Respecting all Religious Beliefs Without Exception?

On the verge of the third millennium it is interesting to wonder: where are we from respecting the views and beliefs of all religions even those of the bygone myths?

The media reported in the past few months that the fundamentalists who control Afghanistan had issued an edict ordering the closure of more than one hundred private and all public schools for girls and limiting girl education to lessons of Koran given only to those who are less than eight years old.

The international attention was recently attracted to the nuclear race between India and Pakistan. Political analysts consider the problem of Kashmir a mere representation of the deeper religious hostility which had triggered the civilizational and ideological conflict in 1947-a bigotry that led to the assassination of Mahatma Gandhi, the apostle of peace and spirituality, the man who strove and sacrificed himself to sow the seeds of religious tolerance and respect of all beliefs in order to attain peaceful coexistence. Iran "saluted the Islamic bomb that reassures the Muslim world.

The media also published that a fanatical group of Protestants set fire to ten Roman Catholic churches in Northern Ireland despite the endeavor to establish peace in that area. (See World News in the Arabic Section, p.90)

The American scholar Joseph Campbell, among other anthropologists, sees that most of the world religions, old and contemporary, monotheist or pagan, have pivotal themes in common, such as life beyond death, retribution, the existence of divine entities that control the destinies of humans and the forces of nature... Those elementary common motifs which aim at promoting goodness and virtue have been pervaded throughout the centuries with various changes befitting the psychology of every people. The anthropologists point out that several of the religious beliefs should be considered as myths. These beliefs include supernatural ancient events that cannot be proven scientifically or historically but are only accepted by those who believe in them. (See two articles about mythology in the Arabic Section, p.5 & p.21)

According to this perspective, the peaceful coexistence of peoples of different civilizations, or of different groups of believers, requires religious tolerance and respect of all beliefs. Furthermore, the protection of the freedom of belief benefits all mankind. In the words of John Stuart Mill:

If all mankind minus one, were of one opinion, and only one person were of the contrary opinion, mankind would be no more justified in silencing that one person, than he, if he had the power, would be justified in silencing mankind (...) But the peculiar evil of silencing the expression of an opinion is, that it is robbing the human race; posterity as well as the existing generation; those who dissent from the opinion, still more than those who hold it. If the opinion is right, they are deprived of the opportunity of exchanging error for truth: if wrong, they lose, what is almost as great a benefit, the clearer perception and livelier impression of tr collision with error. (On Liberty, Prometheus Books, 1986, p.23) * produced i its