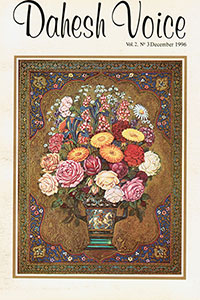 MAN, A METEORITE AND AN APE

In August of this year, two events of quite different order captured the attention of the media and public worldwide. The first was a report by NASA that evidence of a primitive life form was discovered in a meteorite which originated from Mars and landed in Antarctica approximately thirteen thousand years ago. (see Scientific News, p. 89 of the Arabic Section.). The second incident was the rescue of a three-year old boy who had fallen into a primate exhibit pit. A female gorilla, Binti Jua, protected the child by shielding him from the other primates. She cradled him in her arms and carried him to the door where the zookeepers could reach him.

There is no apparent connection or similarity between the two events; yet both strike at long held fundamental assumptions. Once again, the foundation of man's perception of himself and his place in the universe had been shaken.

Perceptive minds have always maintained that the discovery of extraterrestrial life, even in primitive form, would cause a tremor in scientific and religious quarters throughout the world. Paul Davies, winner of the Templeton award, described that such an event would be .... the greatest discovery of all time.. (See a review of his book . Are We Alone?, in Dahesh Voice, June 1996). Nathan Myrrhvold wrote in Time magazine (August 26, 1996) that the announcement by NASA scientists was .... the biggest insult to the human species in almost. 500 years.... The first insult to man's conceit and hubris came from Copernicus (1473. 1543) when he undermined the assertion that Earth, and therefore the .dignified, man. was the center of the universe, around which spun all celestial bodies.

After it became evident that the universe was almost boundless and seemingly infinite, the Earth began to look increasingly insignificant on a cosmic scale. The reaction from those whose ego was injured was inevitable; many scientists and clergy insisted that life on Earth was a unique phenomenon and that man was the highest manifestation of life and master of all living creatures. This attitude reflected man's refusal to share his prominence with other creatures. Not surprisingly, there was a widespread opposition to any opinion claiming the possibility of extraterrestrial life. The recent NASA discovery, however, was humbling enough to compel the arrogant man to concede his ignorance. The Founder of Daheshism had affirmed the existence of extraterrestrial life more than half a century ago. Contrary to narrow theological concepts, Dr. Dahesh believed that extraterrestrial life and civilizations only served to further evidence of the existence of an omniscient, omnipotent, all-mighty God. (See Dahesh Heritage, Arabic Section in Dahesh Voice, March 1996.)

For those who are excessively proud of their species and consider man as the epitome of evolutionary progress, consider the story of the child and the gorilla. Where is this .progress, in rapists, tyrants, assassins, parents who abuse or even kill their children and other such criminals? More importantly, where is the inferiority in the .simple, animal whose altruism will never be attained by those who boast that they belong to the human species? (See Dahesh Heritage, Arabic Section, p. 48.)