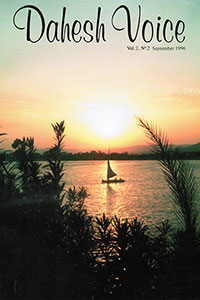 BY HIS WILL POWER,

MAN CAN SHAPE HIS FUTURE

Ever since the Earth received the blood of Abel, the world has been immersed in evil and injustice. However, for thousands of years and in every society, laws to counter these injustices were only applied to the poor and the weak. The principle of equality before the law has emerged only with the dawn of modern times, and remains exclusively confined to those countries where human liberty and dignity are revered and honored among its citizens. Yet, it still seems that earthly injustice exists everywhere. Evildoers and oppressors who scorn justice, evade its sanctions, violate the sanctity of protected rights and prey upon the innocent persist in every society. How will these deviants be called upon to account for their deeds? What would be left to comfort man if all hope for justice was lost? If good and evil stood on equal footing? If might was always right?

Every religion, even those based on ancient mythologies, preaches the existence of a lower world prepared by a divine power for the punishment of evildoers and the unjust. Even in philosophy, an underworld such as this is thought to be a place where the evil suffer psychologically      —if not physically—for their acts.

The teachings of Dr. Dahesh, whose voice this magazine strives to echo, did not differ with the traditional beliefs regarding retribution; however, they did attribute to the Almighty a greater degree of mercy and to man, a wider latitude to exercise his freedom, improve his condition and shape his own destiny. We have shown in the last three issues of this magazine (under the heading Dahesh Heritage in the Arabic section) that the founder of Daheshism, known as much for his innovative ideas as for his wondrous acts, considered that man’s actual state-good or bad        was of his own making; he could, by his own free will, change his destiny and improve his condition. Infinite upward spiritual progression through the exalted worlds depend upon man’s resolve and efforts to attain perfection of self, in terms of improvement of his intellect and tendencies. We have outstanding and illuminating examples in the valiant lifelong struggles of Ali-Ben-Abi-Taleb, Gandhi, Dahesh and many other spiritual pillars throughout history (see articles on Ali pp. 27-37, and Gandhi pp. 5      18, in the Arabic section).

However, since “For surely the human soul incites to evil” (the Koran, Sura Joseph: 53), and “God does not change what is in a people unless they change what is in themselves” (Sura Thunder: II), a reasonable person would find no other choice but to persist in a strenuous struggle against human weakness, evil tendencies and bad habits in order to improve his condition and to have his spiritual self-prevail       -to a certain extent - over even the biological destiny embedded in his genes (see What You Can Change and What You Can’t by Dr. Seligman, pp. 73  -81, in the Arabic section).

According to Daheshism, God’s mercy has no limits and man is not deprived of a free will whereby he can improve his situation even in the lowest worlds of Hell. Therefore, punishment and suffering are not eternal, for every physical manifestation shall come to an end, and every material state shall ultimately change. The only constant        which can create and change destiny— is the power of free will (see Dahesh Heritage, pp. 38    51, in the Arabic section).