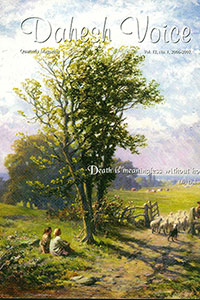 on its Eleventh Anniversary

With this issue Dahesh Voice celebrates its eleventh anniversary which coincides with the 97th Birthday of the founder of Daheshism. On this occasion, the Magazine promises to keep up its mission of promoting humane and spiritual values and

the belief in the essential unity of religions, important for

establishing peace in the world, particularly in this

In the Arabic Section, the Editor follows up his disclosure of the spiritual causes behind world events, in this issue, the advent of Christianity—the birth of Christ, Herod’s order to kill all male infants, the appearance of the Magi, the» discrepancy in the issue of crucifixion in the Gospels and the Qur’an, etc. (p. 6)

Dr. Samira Madi' writes about Sheikh Khalid’s views on the moral and educational problems in Arab countries and how to deal with them. Khalid considers that modern human sciences of the West will remain mere theories, inapplicable in Arab societies ruled by tyranny, exploitation, inhibition, and flawed by deteriorated economic and health conditions. Therefore, it is urgent to arouse real knowledge in every field, starting at home (p. 17).

Ala al-Araji displays the means of education in Arab- Islamic civilization. He illustrates the means used in elementary schools, and points to the debates in which mosques and cultivated assemblies were interested. Then, he brings out the important role played by libraries and schools in spreading science and philosophy, and particularly the primordial role of “Beit-al-Hikmat” (p. 29)

In the literary field, Dr. Victor Kik reveals the role of Karam Melhem Karam in laying the foundation of Arabic novels. He displays Karam’s social, historical, legendary, and translated       ;

heritage, expounding on his novels’ style, structure and sources (p. 73).

Dr, William Miri presents Anis Mansour as a phenomenal journalist. He starts with the circumstances which led to their acquaintance and frequent meetings, then he discusses the factors which shaped Mansour’s journalistic personality and the sources of his creativity. He also discusses Mansour’s style and the role of women in his life and writings (p. 83).

In the English section, Dr. Edgar Choueiri illustrates how to ignite the Arab scientific revolution and simultaneously keep it integrated with international scientific research. He alludes to the scientific contributions made by Arab and Islamic civilizations up to the 12* century, and then suggests solutions based on a holistic plan (p, 4).

Dr. Kaysar Afif undertakes a comparative study of Existentialism and Zen Buddhism. Both consider personal experience more important than cognitive reality, and deem becoming an actor entering into union with life as the only way to get into the reality of things; however, each of them has its own different method (p. 10),

Dr. Mukaddam explains that the health benefits of tomatoes in protecting against cancers and cardiovascular diseases are due to the primary ingredient, lycopene, which is “better absorbed from processed tomato products than from fresh tomatoes” (p. 16).

In this issue, we publish a captivating piece by Kahlil Gibran, written with his fascinating and distinctive style, describing Art and its powerful influence (p. 21, Ar. sec. P. 58).

William Hanna attempts to shed light on the concepts of “Law, Chance, and the Great Ocean of Truth.” His guide is Einstein’s saying: “God does not play with dice” (p. 23).

As usual, this issue includes selections from Dr. Dahesh’s writings—a lyrical piece and a short story which focuses on reincarnation and how affective life attitudes remain unchanged from one life cycle to another. This issue also includes an article on al-Quds (Jerusalem) by May Alloush, along with a sincere testimonial by Ambassador Dr. Abdulrahman Gdaia and a beautiful piece by Mohamad el-Harake, the General Consul of Lebanon in New York, in addition to a poem by Yasser Badreddine, dedicated to Dr. Dahesh on his Birthday. ★