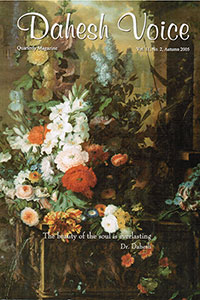 What Builds an Advanced Society?

The level of progress in any society, in general religious terms, is measured by its adherence to the principles of virtue and relevant religious tenets. However, history has proven that the progress of civilizations cannot be attained by righteous behavior alone. It requires parallel progress in arts, sciences and technology, along with the preservation of human rights, such as freedom, equality, justice, and respect for the opinions and beliefs of others—among citizens of one society or among several societies. For societies to advance, lofty thoughts and tendencies should accompany intellectual progress. 'The history of India provides proof. Despite the advent of several wise men who taught lofty values throughout its history, most Indian people continued to live in dreams and illusions, succumbing to the oppressive caste system, yielding to lethargy as well as to the tyranny of foreigners, over thousands of years, until divine mercy was bestowed on India, incarnated in the person of Mahatma Gandhi, whose efforts and teachings altered their manner of thinking and led to the implementation of equality among Indians, thus, putting India on the path to real progress (Ar. Sec. p. 6).

Dr. Suheil Bushrui discusses the issue of world peace, presented in the works of Gibran as being based on people changing their thoughts and attitudes in a manner that strengthens their faith in the unity of mankind, souls, religions and existence—as Gandhi preached. The author reveals that Gibran’s perspective is founded on a morality derived from unconditional love that encompasses all existence and links it to God. Dr. Bushrui also brings out that Gibran’s views are not different from the Hindu philosophy of reincarnation and the belief that all people and things are related to each other by their essential selves and not by their independent forms. He also points out that modern science has begun to confirm the essential unity of existence (Ar. Sec. p. 17).

Dr. Victor Kik deals with the curriculum of teaching Arabic literature in high schools. He considers it a product of dead ages, that does not serve in building good citizens in developed societies, nor is it sufficient for meeting cultural globalization. Dr. Kik elaborates that most curriculum contents are based on individual values that appear in genres, such as elegy, eulogy satire, and boasting poetry. He recommends replacing these subjects with themes, such as love, war, death, friendship, rebellion against tyranny, freedom, equality, fraternity, religious and doctrinal tolerance, patriotism, etc. He also suggests revising the Arabic legacy by bringing out its social and humane values (Ar. Sec. p. 29).

In the globalization of education. Dr. Haouili writes about the revolution in technology of informatics and communications which led to the introduction of on-line vocational training that enables students to keep up with cultural and economic globalization to avoid unemployment and remain in the work force. He also points out that the new revolution has contributed to electronically link workstations at homes with offices, allowing working from far, a reality in the United States, Canada, and several European countries, besides establishing electronic universities in several developed countries ((Ar. Sec. p. 40).

In addition, Mr. Al-Araji methodically replies to the discussions and critique of his book Crisis in the Development of Civilization in the Arab Homeland ((Ar. Sec. p. 52) that have been presented at two seminars.

Dr. M. Attar illustrates that prose is the language of civilization, which accompanies man from cradle to grave (Ar. Sec. p. 73).

In the English section, Dr. Akef Abadir completes his study on Naguib Mahfouz, expounding on how he used the realistic method to write most of his works, particularly Midaq Alley and the trilogy- Palace Walk, Palace of Desire, and Sugar Street (p. 4).

Dr. Serna’an Salem explains the effect of plant and animal domestication on establishing sedentary settlements and revolutionizing culture, industry and conditions of living. He also affirms that this revolution occurred in the Fertile Crescent (p. 12).

Dr. Jamil Daher expounds on the linguistic situation in Arabic. He illustrates that much spoken Arabic includes elements from both Standard and Colloquial, the proportions varying according to the degree of formality of the situation, the speaker’s gender, age, and level of education (p. 20).

In a wonderful short story, Dr. Dahesh uncovers hidden secrets of life on earth, revealing the existence of consciousness in plants and inanimate objects. Dr. Dahesh writes that plants and all that have been so far considered lifeless are also responsible for what they do. The laws of reincarnation, spiritual causality and just retribution apply to them as they apply to human beings and animals. Those who know Dr. Dahesh are certain that this is a reality and not a fiction (p. 31).

The issue also includes a beautiful prose poem by Mr. Mohammad Haraka, the Consul of Lebanon in New York, and another poem by Imad Fouad. ★