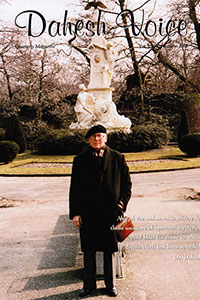 Is There Hope for Revival in the Underdeveloped Countries?

World events in the last several years have proved that globalization is inevitable. However, it is unlikely that total peace will occur in the world, unless the course of globalization is rectified to lead to “One World” in which justice, spiritual and humane values prevail.

These principles would be based on having mankind live as one human family with essential unity of religions. Believing in such a unity is necessary for rapprochement among nations and denominations, and for establishing mutual respect among cultures and openness to every wholesome novelty. Reaching that goal lays great responsibilities on all governments, the most important of which are: getting rid of tyranny, allowing freedom, protecting human dignity' and rights, including non-discrimination in religion, sex and ethnicity. It requires tire help of the United Nations and the great powers to launch diligent efforts to eradicate illiteracy, poverty', epidemics, environment pollution, and all kinds of modem slavery'. Those who are skeptical of globalization shou ld follow the example of the “Asian Tigers” who have adopted from the West everything beneficial to them, be it in political systems, science, or technology, yet they have retained their cultures, including creeds, customs and traditions. In order to progress, Arabs should follow the Quranic verse: “Verily God does not change the state of a people till they change themselves” (See Dr. Brax’s article, Ar. Sec., p. 7).

In the same domain of civilization, Mr. Ala Al-Araji highlights the characteristics of the “Societal Mind”, deeming it to be the best record of society’s history' and culture, including good and bad features. He also reveals that the dregs of the Dark Ages and authoritarian regimes have gathered in the prevailing “Societal Mind” in the Arab World as well as in the various values taken from the modern West, which have not brought any change to the decadent mind, Arab individual and groups behavior is still very influenced by their   ) “Societal Mind” (Ar. Sec,, p. 29).

Going back to the Golden Era of Arab civilization, Dr. Majed Fakhry, an authority in philosophy, j highlights the tolerance of Moslem scholastic theologians, and their religious dialogue with the        if Christian theologians between the eighth and the tenth centuries. Let’s hope that cultural openness which benefited Arab civilization in the old times may come back in the near future (Ar. Sec., p. 20).

We should acknowledge Dr. Fakhri’s contribution, and praise his wonderful and brilliant translation of the Glorious Qur’an.

Mr. Okin Monofar Barsom, a specialist in the Syriac language and literature, highlights the f cultural history of the Syriacs and the achievements of the Syriac authors who made great contributions to Arab Civilization, by translating the most important books in Greek philosophy and science in the period when religious tolerance and open-mindedness prevailed in the Islamic World (Ar. Sec., p. 42).

However, a number of thinkers and writers have broken away, like flambeaus of hope, with the present darkness reigning in the Arab countries. Among them are two Iraqi poets: al-Sayyab and al- Bayyati. Dr. El-Hage discusses the pioneering role of al-Sayyab in Arabic poetry and his heroic attempt       charged with visions, mythological and historical symbols--—to get out of collective tragedy.

He explores the phases of the poet’s life which is replete with anxiety' and suffering (p. 4). Ms. Ghalia Khoja reviews al-Bayyati’s book, The Fountains of the Sun a Biography, revealing significant stages of the author’s life and prominent characteristics of his poetry' (Ar. Sec., p. 63).

In the English Section, readers will find an article on the extinction of life in the distant past, when some asteroids, meteors, or comets struck the earth. Dr. Salem wonders about the possible existence of civilizations which may go back millions of years, but not a vestige of them has remained behind to be studied by archeologists (p. 14).

This issue is distinguished by several eulogies dedicated to Dr. Fareed Abou Suleiman, a great Daheshist who passed away on the 20* of April. Loving friends describe his good qualities, and praise his devotion to Daheshism and his advocacy of it.

As usual, we selected from the wonderful writings of Dr. Dahesh an inspiring short story which explores the diappearance of “Atlantis”, the great lost city mentioned in Plato’s writings (p. 22). ★