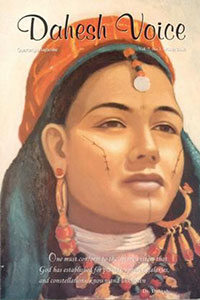 A system built on a strong economic and military foundation. This definition may be applied to Athens at the time of Pericles, to the Roman Empire as well as to the modem West. Today, an advanced civilization also demands good education, developed technology, diversified media and rich entertainment. In light of the teachings of Daheshism, however, an advanced society is also characterized by justice, freedom and high moral standards—a spiritual dimension expressed in the society’s culture and embodied by its members.

Extreme wealth, “luxury fever” and easy self­-gratification alone cannot lead to advanced civilizations. We cannot be just, in the Platonic sense, and at the same time hedonistic, applying a double standard; we cannot be good and at the same time selfish—averting our eyes from 40.000 children dying each day' from malnutrition and disease (See Arabic Sec., p. 5).

States that are preoccupied with the material aspects of civilization remain at an early stage of progress. Others provided with creative minds may be able to instill democracy in their institutions and develop advanced technologies. Nevertheless, they remain at a slightly higher level in the scale of progress. Only lofty cultural standards in any country' can be true indicators of its advanced civilized life (See Arabic Sec., Dr. Kik’s article, p. 18).

No doubt, art is an important component of culture. The aesthetics of Islamic art have their peculiarities and unique beauty' which Dr. Atiyeh and Ambassador El- Sayed reveal (See Arabic Sec., p. 75 and p. 83). This

cultural feature also can be applied to the treasures of Arabic libraries. Dr. Haouili discusses the development of libraries in the Arab World during the past 150 years (See Arabic Sec., p. 33).

Our modern civilization, however, should not make us so proud. For, amazingly, more than 4000 years ago, the Egyptians (among others) had an almost similar civilization, having advanced means of building monuments and performing mummification (See Dr. Alsadawi’s article, p. 19). Further, we may be very humbled if an extra-terrestrial civilization reveals itself to us (See Dr. Salem’s art., p. 11).

Arab Americans have contributed to the cultural stratum of the Middle-Eastern as well as the American civilizations (See Arabic Sec., Wertsman’s article, p. 26). Among them is the most famous Kahlil Gibran, author of the Prophet. In a recent visit to Besharre, Lebanon, the birthplace of Gibran, Dr. G. El-Hage discovers some worrying aspects, which he plainly expresses in an impressive essay (p. 4).

Gibran, in his late years, authored Lazarus and his Beloved, a captivating small drama written in English, and still unknown to most Arabic readers. Tony Shasha translates it into Arabic in his beautiful poetic style, yet faithfully revealing the spirituality' of Gibran (See Arabic Sec. p. 64). And as usual, the issue includes short stories by Dr. Dahesh, with a spiritual significance of divine and just retribution (See English Sec., p. 27 and Arabic Sec., p. 43).★