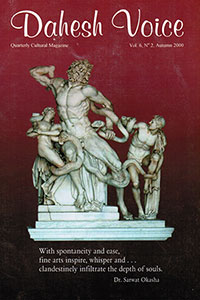 Art and science ate the double helix of civilization. Their importance has been wen throughout history,

And THEYHAVE, THEREFORE ALWAYS been given special attention Dahesh Voice.

In this context, the current issue of Dahesh Voice includes articles written by eminent scholars and scientists whose works deal either with the role of art in the progress of mankind and society, or with the role of philosophy, science and technology in the advancement of civilization.

The ancient Greeks considered beauty to be one of the virtues. Plato linked ideal beauty to goodness and truth, and Aristotle ascribed to art the power of “catharsis”, i.e., purifying strong emotions and passions in the artist or author as well as in the spectator or reader. Dr. Sarwat Okasha writes about “Catharsis through Art” (Arabic Sec., p. 5). He explains the effect of art   be it theatre, painting, sculpture, music or cinema- on relieving psychological

tension and anxiety. In another essay, Dr. Mohsen Atiyah explains that the sublimation of instinctual impulses through art results in happiness, and that artistic beauty enables us to get to the core of things and sense their unity (Arabic Sec., p. 20).

Next, Dr. Ahmed Etman sheds light on the role of illusion and non-illusion in ancient Greek as well as in classical and modern theater. As he demonstrates, the best expression of artistic beauty may be found mid-way between the two extremes where equilibrium is achieved (Arabic Sec., p. 24).

The beautiful aspects of Lebanese Zajal (vernacular poetry) through its leaders are displayed by Dr. George El-Hage (Arabic Sec., p. 59).

In addition to our feature articles, readers will find a poem from the Daheshist poet Halim Dammous and again a lively and challenging material selected from the works of Dr. Dahesh: a short story which displays the powerful effect of physical and spiritual beauty, through sincere love and loyalty, on human relations and the miraculous course of events (Arabic Sec., p. 42 and English Sec,, p. 24). In his book review of The Repose of Death by Dr. Dahesh, Ahmad Lutfi Esquire compares the words of the author on divine love and divine beauty, and on the mysteries of death and immortality, to the great music of Wagner with its mystical and inspiring significance (Arabic Sec., p. 35).

On the other hand, Ala’ Al-Araji writes about the human mind, explaining the important role of the active, as opposed to the passive, mind in advancing civilization and changing the course of history (Arabic Sec., p. 78).

Dr. Sema’an I. Salem writes about “Medicine in the Ancient Near East”, emphasizing the fact that “the contribution of ancient Egyptians to the field of medicine inspires as much awe and wonder as their contribution to the field of architecture” (English Sec,, p. 4); whereas Dr. Philip Salem brings us back to modern times by discussing a major modern health problem: cancer (English Sec., p. 19).

The issue is also enriched by biographical and critical essays by Dr. Taysir Nashif, Awad Shaaban, and Nicolas Daher that reflect on issues from everyday life; whereas the poet Mousa Maalouf praises the sublime moral values of the late Halim Dammous,

We hope that this collection of fine articles and essays will satisfy our readers and enrich their lives. *