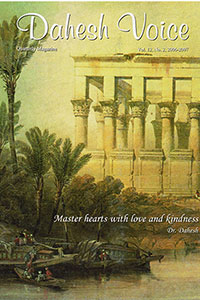 Progress in Society Depends On its Spiritual and Intellectual Values

During the first three centuries when they respected Greek logic and spiritual philosophy and pursued higher spiritual and humane values, such as tolerance, love, compassion, and other virtues, early Christians progressively succeeded in propagating their

faith and won the respect of Roman society', built on injustice, materialism and violence. However, when they became attracted to worldly values and engrossed in blind fanaticism, internecine conflicts started with consequent weakness and decadence. In addition, the alliance between religious authorities and political power or wealthy families resulted in an inevitable deviation of the Church from the original straight path of Christianity and divine order (Ar. Sec., p. 8).

In the same vein, Dr. Samira Madi expounds on Sheikh Khaled’s humane views that philosophy, science, and religion can cooperate to pave the way of knowledge and virtue for the human mind (Ar. Sec., p. 19).

Ala Al-Araji discusses the philosophy of education in the Arab world. He puts forth that traditional values and ideas may harm children, and subsequently society, if imposed as immutable truths (Ar. Sec., p. 27).

In the literary section, Dr. Ahmed Etman writes about the famous Greek writer Kazantzakis, describing the great feelings he had upon visiting the Egyptian Museum, gazing at the Sphinx’s eyes, and contemplating the Nile and many other wonders of Egypt. He adds that Kazantzakis believed he had Arabic roots (p. 10).

Dr. Victor Kik discusses the social approach in Karam Melhem Karam’s story-telling. He discloses that the Lebanese novelist was keen on describing society in its vibrant reality- and analyzing his heroes’ psyche with sincerity, justice, and elegance (Ar. Sec., p. 44).

Dr. Ali Haouili discusses the future of print journalism in the internet era. He concludes that both print and electronic journalism will coexist and thrive (Ar. Sec., p. 35).

The scientific section includes three significant articles: the first by Dr. Sema’an Salem in which he reveals when human beings started altering global climate (p. 4); the second by Dr. Steven Patascher in which he stresses the power of the mind in the treatment of diabetes (p. 17); and the third, a philosophical discussion by Dr. Yahya Shemali on the complex aspects of the genome and phylogeny (Ar. Sec., p. 79).

This issue includes, as usual, a short story by Dr. Dahesh, describing, in a very impressive style, how sweeping love may lead to a tragic and unexpected end (p. 28; Ar. Sec., p. 71). It also includes an article by Sayed Najm on the flowering of modem Arabic novels (Ar. Sec., p. 50), an article by Fatima Naout: on architecture and poetry (Ar. Sec., p. 61), an essay by Dr. Maha Attar on Arab medicine, personal experience, and thoughts (Ar. Sec., p. 85), along with a beautiful poem by Ali Juma’a addressed to Dr. Dahesh (Ar. Sec., p. 67). ★