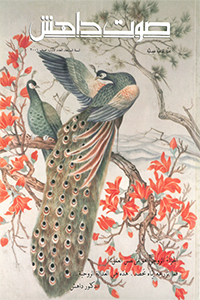 This issue marks the sixth anniversary of Dahesh Voice. As always, with every anniversary, we celebrate the birthday of Dr. Dahesh (June 1"). whose name and voice the magazine bears, and from whose teachings we derive inspiration, courage, perseverance and strength. Thanks to Dr. Dahesh, this magazine is a platform for truth, goodness and beauty, a voice of spiritual guidance transcending earthly trifles, egoism, sectarian, and regional fanaticism. It is a genuine call for world peace, brotherhood. and justice, as well as a call to consider all religions as different chapters of one book, that of Spiritual Guidance.

Dr. Dahesh suffered from unlawful persecution by the Lebanese ex-President, Bishara el-Khoury (1943-1952). in collaboration with some clergymen and politicians. That persecution was against Dr. Dahesh's lofty call for freedom of speech and belief, and for religious tolerance and human brotherhood. Dr. Dahesh's suffering was not in vain his star is shining brighter than ever. Spiritual guides like him are immortal as it is impossible for history to forget humanitarian reformers and geniuses. The splendor of prophets and apostles as well as of spiritual guides like Socrates, Buddha and Gandhi increases with time as much as the significance of their persecutors decreases.

During the last six years, Dahesh Voice has been proud to publish articles written by rich and illuminated minds, eminent thinkers, scientists, and university professors from different Arab countries as well as from Europe, Canada, and the United States, In its Arabic and English sections, various issues on civilization, history, literature, linguistics, art, science, religion, mythology, medicine, psychology, sociology, and pedagogy have been thoroughly discussed. Spiritual principles of Daheshism have been explained. Reviews of important books have been published along with remarkable novels, novellas, and poems. Further, each issue has provided readers with unique selections from the inspired writings of Dr. Dahesh, along with the most important in world news, scientific news, and recent statistics. A global look at the last twenty-five issues of Dalesh Voice reveals that the magazine is an encyclopedia of knowledge-unifying articles treated in a thoroughly academic yet interesting and stimulating manner.

On this anniversary, we thank our readers for their encouragement that drives this magazine to maintain a high standard of content and presentation as well as diacritics, which are absent in modem Arabic journals and magazines, and scarce even in literary books. We also deeply thank all those who contribute to Dahesh Voice, in every step of the process, from providing high quality articles to production and distribution. We appreciate your continuous support! *