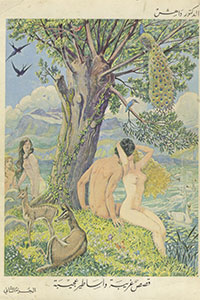 This is the second volume of my book "Strange Stories and Wonderful Tales ". I have named it "35 Stories Written by Dr. Dahesh", and it is a sequel to Volume 1.

The stories of reincarnation events that I’ve written are not the least bit imaginary, for I believe in reincarnation just as I believe in the reality of my own existence, which means that Man returns to earth over and over again so that he would able to purify his soul from its sins and rectify his mistakes.

The Torah mentions in the "Book of Exodus" that the judges used to penalize a rock, if it fell on a person and killed him, by crushing it until it is in powder form and then scattering it in the air. They also used to judge animals as well as men if they engaged in acts of bestiality by sentencing them to various punishments.

So how could it be that an animal or an inanimate object be judged and sentenced had the judges not believed that they were aware and responsible for their actions, just as any rational human being is  when he commits a crime and pays for it with its corresponding and suitable punishment.

Lord Christ, the founder of Christianity, when asked by his disciples about the Prophet Elijah and the prophecies that confirm his return to earth: when will his return be? He answered them by saying that Prophet Elijah had already returned to earth, and was now known by the name, John the Baptist, who was beheaded by the tyrant Herod as requested by wicked Herodias and her daughter, because John the Baptist had admonished Herod for unlawfully marrying Herodias as she was his brother's wife.

On another occasion and when asked by his disciples about John the Baptist, Christ replied: "And if you are willing to accept it, he is the Elijah who was to come." (Matthew 11:14).

And when asked by his disciples after he healed the blind man: “Rabbi, who sinned, this man or his parents, that he was born blind?” Jesus replied: “Neither this man nor his parents sinned, but this happened so that the works of God might be displayed in him." (John 9:1-3).

The Jews also used to believe in reincarnation during the era of Christ. And the proof is what was mentioned in the bible: "But others were saying, 'He (meaning Christ) is Elijah.' And others were saying, 'He is a prophet, like one of the prophets of old. ' But when Herod heard this, he said, 'John, whom I beheaded, has been raised from the dead!" (Mark 6:15-16).

Moreover, is it not a horrible injustice when a baby is born blind, or paraplegic, or disabled? How could it be his fault to be born with such dreadful disabilities if he hadn't committed any sins? Would God ever accept such great injustice?

However, once we realize that a baby is born blind or disabled as a fair consequence to transgressions and wrongdoings committed in a prior reincarnation cycle, then we can understand the justice of God Almighty.

Consequently, the Christian world must believe in reincarnation and in the fact that man returns to earth time and time again until he achieves purification from his sins. For only then, that he can ascend to a distant and happy world, leaving behind planet earth and all of its perpetual misery and endless evils.
As for Islam, the Holy Quran references reincarnation in multiple verses, including Surah Al-Baqarah, Verse 28: "How can you disbelieve in Allāh when you were lifeless and He brought you to life; then He will cause you to die, then He will bring you back to life, and then to Him you will be returned."

And in Surah Al-Infitar, Verses 6-8: "O man! What has seduced you away from your Lord, the Gracious? Who created you and fashioned you, and proportioned you in perfection? In whatever form He pleased, He constituted you.”

As for Surah Ghafir, Verse 11: "They will say: “Our Lord! You have made us to die twice and You have given us life twice! Now we confess to our sins, then is there any way to get out?”

And in Surah Al-Waqi'ah, Verses 60-61: "We have ordained death among you and We are not to be overcome, to transfigure you and create you in forms that you know not."

And in Surah Al-Ma'idah , Verse 60: " Say: ‘Shall I inform you of something worse than that, regarding the recompense from Allah, those who incurred the curse of Allah and His wrath, and those of whom He transformed into monkeys and swine, and those who worshipped Taghoot, such are worse in rank, and far more astray from the straight path.”


On the other hand, Buddhism strongly confirms the concept of reincarnation. Buddha, the founder of Buddhism, mentioned that he reincarnated multiple times. He recounts being a rabbit that sacrificed itself as food to a lion.

As to the people of India, their Hindu Religion is based on reincarnation; and that is why we see them using feather fans to disperse insects when walking in woods, in order to avoid harming them. For they believe that these insects were humans that committed wrongdoings in prior reincarnations, and merited to be born as insects, animals, birds, or other similar creatures, with each classification corresponding to their conduct during their prior physical lives.

And a couple of years ago, a scientist by the name of Cleve Backster, who is one of America's leading specialists in the manufacturing of polygraph machines, published his work and declared in newspapers around the world, that plants think and feel just as humans do, as well as exhibiting feelings of joy and pain, remembering those who are compassionate with them, sensing nearby danger and defending themselves accordingly, in addition to having accurate and mysterious means of communication aiding in detecting and comprehending human thoughts.

Backster proclaimed that a flower could sense if someone is going to pick it and is engulfed in fear. He registered its emotions using his electronic instruments. These instruments were able to records its various emotions and senses, such as joy and sadness, sleep and awake cycles, and the likes…

The scientific society considered his findings as one of the greatest discoveries that will drastically change how humans think and how they perceive their mysterious surroundings.

And another fact that proves the existence of reincarnation are fruit trees that, at the beginning of winter season, become bare and leafless, just until the spring season when it blooms again,  grow leaves, and bear fruit. This cycle recurs year after year, be it a tree, plant, etc.

Isn't this considered reincarnation? Isn't the yearly return of flowers, fruits, or plants a return to life and existence?

Why are we willing to acknowledge this idea but not the fact that humans reincarnate multiple times after death in order to be given a chance to ascend spiritually and overcome their weaknesses and sins.

For reincarnation is a mercy from God Almighty, such that, in our multiple returns to earth, we can rectify our sins and elevate our souls.

On the morning of January 22nd, 1971, I came across a long article in "Al-Diyar" newspaper that talks about plants and trees, from which I selected the following excerpt:

" In the past, ancients used to consider trees to be bodies of the gods, worshipping them and asking them for help in times of need.

They also used to believe that trees are sentient beings that can communicate with each other. No wonder, for even now, we water flowers and trees because we perceive them as "souls", and reprimand anyone who snips any of their segments and consider the act to be a “crime”.

And this concept applies not only to Eastern civilizations and Moslems, for the Western civilizations held similar beliefs and sanctified trees just as we do. It is even said that the Virgin Mary had her labor under a tree, and Christ descended and lived with his mother under a tree.  Also, when he held the bread and ate from it saying: " This is my flesh", it was a symbolic reference to the soul of the tree, and that is why they use a tree to celebrate Christmas and the New year. As for the Pledge of Satisfaction (Pledge of Ridwan), that was sworn to the Islamic prophet Muhammad by his Moslem companions, it took place under a tree, that was consequently called " The Blessed Tree".

Buddhists, on the other hand, believe that Buddha had his inspired teachings under a tree, and Gilgamesh sought immortality in the plant of life. Taoism also teaches its followers:  Learn wisdom from the tree, etc. "


As for Daheshism, our theory of reincarnation is as follows:

All religions teach and confirm that once a man is born on earth, and during his lifetime, he commits either good deeds or evil sins. And when he dies, he will either go to heaven if he was righteous or descend to hell if he was evil.

A human being usually lives around 70, 80, or 90 years. Of these, 35 years are spent in sleeping, 4 years in illness, and 15 years are considered to be the years of childhood innocence. So, whatever short span of years that remain, constitutes what he would be responsible and accountable for.

And undoubtedly, he will not be able to live a morally idealistic life, for our world is full of temptations that trap the individual in their web with little hope of escape. For the pursuit of women awaits in order to lure him into the depths of lust and desire; and the love for wealth will enslave and shackle him with its irresistible chains; in addition to arrogance, pride, egotism, etc. All of what I have mentioned will surely lead him down a path of destruction and doom.

Therefore, if we are to ascertain what the founders of religions had advocated, all human beings will end up in hell, suffering throughout the ages in eternal agony and misery.  And this would be an absolute injustice and unallowable, for God's mercy is immense and abundant. For this reason, He granted us the gift of reincarnation so that we have the opportunity to elevate our souls and better ourselves. He gave us the chance to return to earth maybe up to 6000 times, so that, during these thousands of reincarnations, we would be able to overcome our weaknesses and ascend to heaven.

For 6000 reincarnation cycles should provide the human being ample opportunities to improve his conduct. If after these 6000 cycles, he remains on the path of evil and sin, then he would justly deserve to settle in the eternal fires of hell.

I have set forth to the readers this summary of the theory of reincarnation irrespective of their stance towards it, be it acceptance or rejection. For every being is free to believe in whatever idea he wishes, be it right or wrong. As for me, I publicly declare that I believe in reincarnation just as I believe in the reality of my own existence.